We drove down Highway 5A from Kamloops to Merritt this morning. There was light snow and some fog. And some mysteries. How, for example, did this carcass (species unknown) get into the middle of frozen Trapp Lake? We wondered if it might be the way the highways crew deals with road-kill, dragging it to the centre of the lake so that birds could feed from it and then once the ice melts, the remains will simply sink to the bottom of the lake. But there were no marks of its having been dragged. So did a deer try to cross the frozen lake and then break through the ice, floundering until it died? The ravens were awfully happy, in any case, and there were eagles earlier when we drove down. (We took the photograph on our return.) 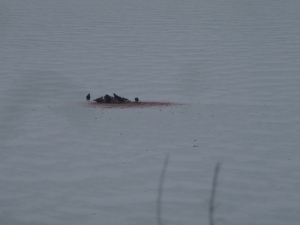 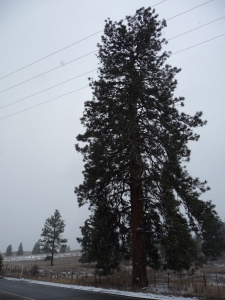 and slowed to admire it. Then we saw a small brass plaque on it.

Who was Eleanore MacVicar and who was Mac?

This is a ranch I notice every time we drive this road. I’ve imagined myself into it, a hundred years ago, many times and realize now that Margaret Stuart would have ridden past it in my novel, Sisters of Grass. I love its plain beauty, its vistas. 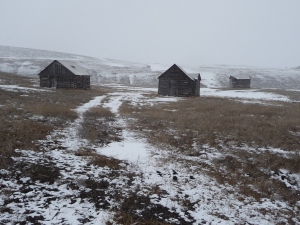 And here’s a pair of swans, on ice, in Nicola Lake. The rest of the flock was swimming nearby but this pair wanted to ride a small section of ice. 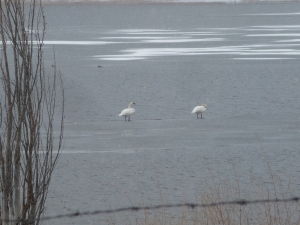 There was nowhere to pull over when we saw the newborn calves at the Willow Ranch or I’d end this post with them — tiny, black, their ears already pierced with bright red tags. Instead, I’ll end it with a pinecone from Eleanore MacVicar’s tree. 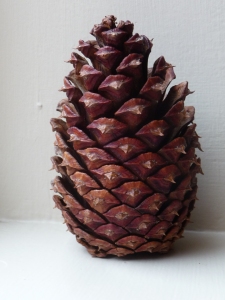 7 thoughts on “small stories on the Merritt-Kamloops road”