This morning we walked to Haskins Creek again. Three days ago we didn’t see a single salmon in the creek but now they’ve arrived! These are Oncorhynchus kisutch, the coho salmon. 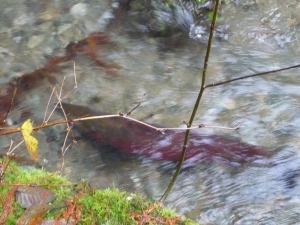 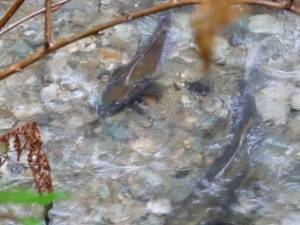 Haskins is a narrow creek, hung with salmonberry, ferns, and other native plants as well as Himalayan blackberry vines encroaching at the lower end where the creek empties into Sakinaw Lake. One year Angelica and her friend Gloria did a science project in which they sampled aquatic insects in this creek over a five week period and found that the numbers and varieties of insects indicated that the water quality was quite high. There are huge cedars near the creek too. Later in the run, we’ll find spawned-out carcasses distributed over the ground where eagles, bears, and ravens have dragged them.

For some years I’ve followed the work of Dr. Tom Reimchen at the University of Victoria. He’s a biologist who studies the relationships between salmon and forests of the western Pacific coast. One of his areas of interest is the occurance of the salmon signature in the growth rings of ancient trees. I’m not a scientist but I think it works this way. Nitrogen 15 is an isotope occuring mostly in marine organisms. Salmon are eaten by bears, wolves, and birds, and what’s left of the carcass enters the terrestrial ecosytem through decay as well as in the excrement of the birds and mammals who distribute the heavy nitrogen in the forests. The number of salmon in any one year will vary depending on species and whether it’s a peak year or not. So the tree ring growth will reflect these flucuations. The story gets more complicated of course as all good stories do but I think of this amazing cycle every time I see the fish and the huge trees growing by Haskins Creek.