Today we began the bench for the greenhouse, the one to hold seedlings and pots; it will sit along the west wall, the long wall, which is 10 feet. Luckily we had some cedar boards under the house, a little longer than we need them to be, so it seems like a good idea to use one of them. I pulled it out and we measured and decided to cut a bit from both ends because one end had a crack and the other was quite wide. But mostly? Perfect. This is a board from one of the cedars we had taken down at least 13 years ago. One of them was too close to the house and the other had grown from a weedy scrap to a big tree in the time it took to blink. And it was shading the vegetable garden. I wrote about these trees in Mnemonic: A Book of Trees, which is why I know how long ago they were taken down. 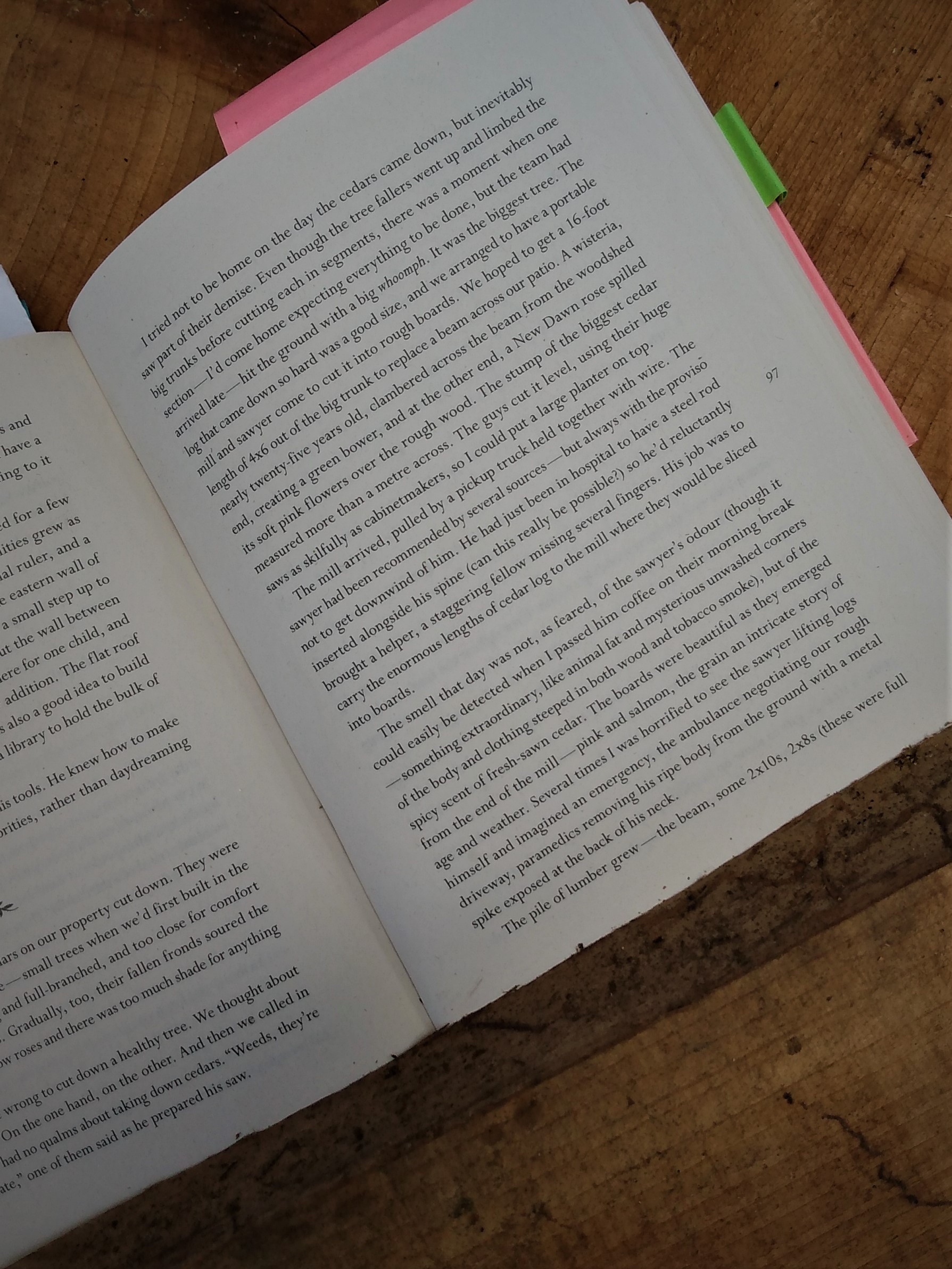 When John cut the board we’re using to size, it was as though it was fresh cedar, the scent so spicy and beautiful that I remembered everything about the day it was made. I remember the guys coming with their portable mill and cutting lengths into boards and how we used some of those boards for various projects. I remember how one of the guys had his own peculiar odour (we’d been warned) and how he used his big saw and mill with the precision of a cabinetmaker. These planks are wild-edged, so that you can see where the branches were, the contours of the trunk.

I brought up our old sawhorses to set in place behind the greenhouse so John can cut old boards from our original decks, the ones that were in place for 30 years or so before we rebuilt them for various reasons, saving the usable boards for a good moment, which is this one. Look at them, he said. You can see where I almost cut through in places. And look at the rust on the brackets! Yes, I thought. Look at them. They’ve seen better days. I’m glad to be able to use the old deck boards, John said, arranging them to measure and cut down slightly. We have become our parents, I think, saving everything to be used again, or repurposed for something entirely undreamed of, in years past.

They’ve seen better days but so have we. Or have we? We’ve seen good days. Also the past year, which has been filled with difficulties due to surgery, loneliness, anxiety. But maybe this act of making a bench will serve as a hinge to openings. More light, the return of friendships gone fallow because of distance and fear, and even arrangements of seedlings on its beautiful surface, growing, growing, because that’s what it is in them to do, given the right conditions.

The pile of lumber grew—the beam, some 2x10s, 2x8s (these were full dimensions, as the boards were unplaned), some planks which began as one dimension but then tapered as the logs narrowed. I could see them as benches or tables, balanced on stumps. I kept touching them. Their surfaces were damp, the inner mysteries of the wood released to light. On one chunk of wood, hardly a board, the grain formed an eye, elongated and ovoid—a god or a raven staring out. When I smelled my hands afterwards, the incense lingered, familiar and sibylline.
–from “Thuja plicata: Nest Boxes”, in Mnemonic: A Book of Trees