We’ve always liked Princeton. It’s somehow intact, with its low buildings, modest houses, and (in recent) years, its fabulous Traditional Music Festival, which is the same weekend as our Pender Harbour Chamber Music Festival so I’ve only been once, alas, in 2010. But it was memorable: great music on several stages throughout the town, guerilla Morris dancers leaping to the sidewalk from behind parked cars, and a dance in Veterans Square where complete strangers responded to the caller and sashayed, promenaded, and dosey-doed, us among them.

We stayed one night in Princeton on our way back from Kelowna. First, a walk. Past the old halls, the museum, the small houses dating from the area’ mining days. And wait, was that a train whistle? No, it was a white pick-up truck going slowly up and down Bridge Street, two guys gleefully sounding the horn (or whistle and bell arrangement) set up in the back of the truck. We stood aside as a woman in a long skirt, sequinned top, cowboy hat, pulling a wheeled dufflebag with one hand and casually swinging a large double-bitted axe with the other. A double-bitted axe just like this one: 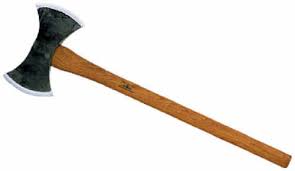 There were posters advertising a free concert that evening in Veterans Square, starting at 6. So just before 6 we ambled down to see what music a swing band called RPM might perform on a warm night in the Similkameen Valley. At first it was just the 5 of us — the couple with the baby who set up chairs right in front of the gazebo (they might have been relations, given the nature of the banter) and us, sitting further back on the benches surrounding the square.

And the music was just right. The Bee Gee’s “Words”, “Tennessee Waltz” (which almost had me pulling John to his feet to dance on the (mostly) empty square).  A few more people drifted by (but not many), sitting on benches and clapping enthusiastically after every tune.

As we walked over to the Little Creek Grill for dinner (Greek, and delicious! Though we almost tried the cleverly-named Vermillion Fork…), we passed a man on the sidewalk, taking a smoke break in front of the Legion.

–How are you folks tonight?

–Good, thanks. How are you?

–I’d be better if I wasn’t packing 80 pounds of rocks BACK to the river — I’m supposed to be home.

There was a huge bucket on the sidewalk with a goldpan, a small shovel, and what looked like rocks. 80 pounds of them. And therein lies a story.