Lately I have been thinking about bridges and gates. Both of them are practical things and both of them are means of transporting us from one thing to another. From one side of a river to another, from one realm to another; both are openings in a way, if we allow them to be. Well, a gate or a door is obviously this but a bridge also has the ability to open us to a landscape, a far shore, without the potential danger of crossing a river by swimming or on horseback or by small boat (“The water is wide, I cannot swim o’er…“). My mother used to say, Let’s cross that bridge when we come to it, and I’d ponder this in a way I never pondered the verses we had to memorize in Sunday school.

Many years ago, John and I happened upon a Paul Feiler exhibit at the Tate St. Ives. I was unfamiliar with his work but loved it, particularly the Janicon paintings. Feiler had trouble with his sight at the point in his life when he painted these serene works named for the god Janus who looked forward and backwards at once. John loved them too and wrote a poem exploring his reaction. The poem walks us through rooms filled with the shields and portals of the Janicon paintings. And then it tries to grapple with what they mean.

Is there something, I scribbled down

parallel to do in language?
The catalogue quotes Whitman: Darest though now

Oh soul/Walk out with me toward the unknown region…
The catalogue quotes Pound: In the gloom the gold

Gathers the light about it. I sit down
with my mother months later in her garden pergola.

I sit down with my mother outside in her last
moments at home, in her last moments before

the Home, the crazy talk a moment suspended.
A bird passes. I tell her many times after on the phone

how her wisteria has grown to command our patio…
the lattice filling, portals closing, shade. There is nothing

parallel to do in language. Do you see?
Do you see in the null shine how we’re leaving

everything behind? I refer you to the catalogue.

— from “Janicon”, published in crawlspace, winner of the 2012 Dorothy Livesay Poetry Prize (if you click on the link, you can see the cover of the book; it features Janicon LXXXIX)

I was looking out a few minutes ago towards my garden and saw its gate: 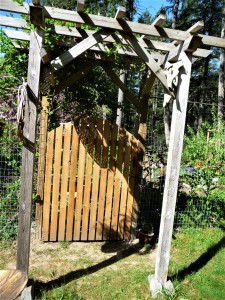 And now at my desk, I can see another portal: 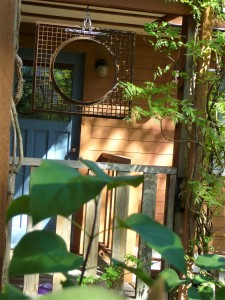 This morning an orange-crowed warbler perched in this particular opening, singing. I was at a loss to express how I felt at the song coming in my window as the bird sang in the old burnished iron. The song so simple in the morning light, the tendrils of wisteria, brought by John’s mother so many years ago (and from her mother, before that, tucked into plastic bags for the long flight from London to Vancouver). So much has been left behind but so much has gathered too in the areas around gates, iron grates, bridges over rivers dark with mud and the sound of magpies. Do you see? I wanted to ask but by the time I rose from my chair to call John, the warbler had flown.