I looked in An Exaltation of Larks for the collective noun for robins. There are so many of them this year, singing, playing chicken on the side of the highway (and these must be males, flying up at the last minute…), and following me in the garden, ready to plunge their beaks into the newly-dug soil for worms. And there’s isn’t one. The closest is “a Mutacyon of threstyllys” from the Porkington MS, a mid-15th century miscellany of poetry and prose now held in the National Library of Wales.  The term appears to come from the belief that thrushes grow new legs at ten years of age and cast their old ones aside.

Last year, in July, I wrote a series of posts about the robins nesting on the cedar beam across our patio. It was the first time they’d nested in that particular spot, though we’ve watched robins build on an elbow of drainpipe on our printshop, in an angle of grapevine climbing our southern wall, and — three times! — in a willow now completely claimed by clematis above the west-facing deck. One year we watched three robins learn to fly and it echoed the passage of our own children away from home. It was very sweet to see the parents and two of the young all in a fir tree calling to the remaining nestling until, whoosh, it flew clumsily from the nest to join them. Every time I see this, I wish for wings myself. Imagine just…well, flying. Gliding away from the nest on wings you never knew you had, the whole world opening.

We were away for four days last week and when we returned, there was a nest in exactly the same place on the beam. No sign of robins but a nest, newly made. And by yesterday, there was a female robin tucked into it — so I’m assuming she’s incubating eggs. The literature talks about “nest fidelity” — the willingness of robins to return to locations and even reuse the same nests. Ours have never reused a nest but maybe that’s because we occasionally remove them (the one on the beam last year) or else the clematis smothered the opening where a bird might enter the cool interior of the willow.

This year, the female is not as skittish as last July. She remains on the nest while I’m watering. I put a saucer of worms on the ground below the nest and went off to do something else. When I passed that way again, I noticed that all the worms had been eaten. So I bet she remembers that I fed her last year too.

I think of Emily Dickinson:

I’ve heard it in the chillest land –
And on the strangest Sea –
Yet, never, in Extremity,
It asked a crumb — of Me.

Every year the same things happen. I begin the tomato seeds. I wait for the first ripe fruit. Baskets of sun-warmed tomatoes give me such pleasure that I forget I’ve done this for nearly 30 years. And the robins, with their echo of our own life, the tune without the words : a nest,  patience, the helpless young growing to maturity in the time it takes to close my eyes, then open them. 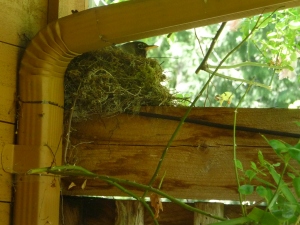