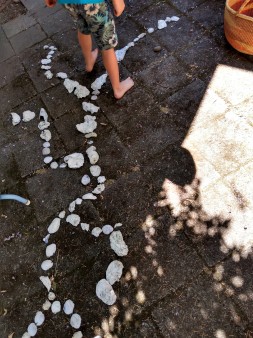 At the pub on Thursday after a swim at Francis Point, I pulled a little Dover book of insect mazes out of my bag for my grandson to work on while we waited for our food. What’s a maze, he wondered, and we told him it was a kind of labyrinth. His dad had already asked if I still had the book of Greek myths he’d enjoyed as a child because he wanted to read to Arthur about the minotaur (a question had been asked…). So we talked a little about mazes and then he took my pen and helped each insect find its destination or prey in the book. By the time we’d finished our meal, he’d finished the book.

The next morning, he wanted to make his own maze. At Francis Point we’d gathered lots of shells to take home for the wind-chime we’re going to make tomorrow. We have driftwood, the shells from the swimming scallops we ate last Sunday (soaked in cleaner after to get rid of the smell!), and I thought we could use some more shells — clam and oyster. They were in my basket. What about the shells, I suggested. And over the next hour, he created his maze. Every time I looked out the window, he was finding his way up and down the paths the shells made on the patio stones.

What is about shells? A maze? You walk and you meet a dead end. (Try explaining that concept to a 5 year old using his pen to help a beetle find water in a little book.) You try again. What you do is not necessarily the thoughtful meditative process provided by a labyrinth. Labyrinth has in its etymological roots the double-headed axe of Minoan culture, symbol of the Mother Goddess. The Cretan labyrinth was built to contain the Minotaur, half man, half bull, the result of King Minos’s wife Pasiphae’s passion for a bull. The Minotaur fed on human flesh and could not be allowed to roam free. The hero Theseus, aided by Ariadne and her gift of red thread, found his way to the heart of the labyrinth where he killed the Minotaur.

I think of the spirals I stitch into my quilts as symbols of the labyrinth. I sew, I think, I attempt what Carl Jung described as a reconciliation between my inner world and the external world. What’s paradoxical is that I begin as a way of dealing with stress, at the centre of the spiral, the heart of the labyrinth, securing my place with a knot and then following the path of the thread outward. It feels intensely meditative to me. In the past 19 months, sewing my spirals has been a curious solace. I wasn’t sure what I hoped for but something, something called.

the rule is, put your right hand out
lay it on the wall, and follow

My grandson stood on the patio, trying one way, then another. Watching him, I was watching myself in the darkness, feeling my way down the stairs in winter, the quilts waiting in their basket for my thread, the red thread, the white, the empty space waiting to be filled.

Note: the lines of poetry are Kenyatta Rogers’, from his poem “Labyrinth:.