Angelica called on Friday to ask about the tiny brown bird she saw spiralling up a tree trunk in Victoria. It looked a bit like a wren, she said to her dad. But he knew it was a brown creeper because we’d just watched one on this tree right outside our kitchen window (and there’s no creeper in this photograph so don’t strain your eyes!): 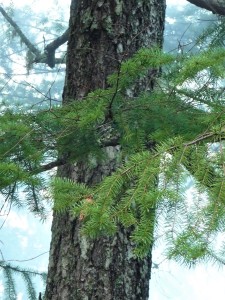 They spiral as they search the bark for insects and they use their tails for balance. While I was watching the bird the other day, I was thinking of stitching, long loose stitches as it moved up the tree trunk and as I sewed the spirals on Henry’s kite quilt. Did I think of the bird as stitching because I was doing that? Are its movements true spirals or do I imagine them that way because I love the Fibonacci sequence in nature and look for it when I am planting and harvesting? And sewing?

About stitching…On Friday night we were reading the Odyssey, Book 12, and John stopped to say, These lines could be an epigraph to one of your essays. The lines, spoken by Circe to Odysseus on his return to Aeaea from his visit to Hades, are part of Circe’s guidance to him as he undertakes what he hopes will be the final leg of his voyage home to Ithaka:

At dawn, sail on. I will explain your route
in detail, so no evil thing can stitch
a means to hurt you, on the land or sea.

We are reading Emily Wilson’s translation and it’s wonderful. But this moment, this word. I wondered how the male translators had handled this passage. So I went looking. My favourite translation until now is Robert Fitzgerald’s. This is probably because it’s the one I came to first, as an 18 year old university student without any Greek. I love the long muscular lines, the vivid language. Here’s how he translates that moment:

Sailing directions
landmarks, perils, I shall sketch for you, to keep you
from being caught by land or water
in some black sack of trouble.

But I will set you a course and chart each seamark
so neither on sea nor land will some new trap
ensnare you in trouble, make you suffer more.

I confess I don’t really know Homeric Greek. When I was writing my novel A Man in a Distant Field, I worked my way through Athenaze, Book 1, an introductory text for Ancient Greek. It was difficult, yes, but the protagonist in my book was translating some of the Odyssey and I needed to be able to do this for him. At that time we didn’t have a very good Internet connection. Ours was dial-up and using it for long periods meant no one could phone us so we tended to be sparing in how much time we spent online. I discovered the Perseus Digital Library, at Tufts University, a great resource for anyone interested in classical texts. You can read them in Greek or Latin or English. You can click on any word in Greek or Latin and you get a little window with a morphological analysis of the word. The Perseus site uses the 1919 A.T. Murray translation.

…but at the coming of Dawn, ye shall set sail, and I will point out the way and declare to you each thing, in order that ye may not suffer pain and woes through wretched ill-contriving either by sea or on land.

I have the Loeb Odyssey, in two volumes, which is Murray’s translation updated by George Dimock, still a prose translation, but the language is less archaic. Circe still points out the way and declares each thing.

When I work through the Greek text, word by word, at Perseus, and with my Godwin Greek Grammar, I get something like this.

No stitching. But Circe was a weaver and would she really use the language of mariners or something more related to the work she did with such skill? I love that Emily Wilson has, in this tiny moment in a huge text, brought a feminine (even feminist) gloss to the language of the poem. And I loved that we both noticed it, reading the poem together, while just outside brown creepers made their own metaphorical stitches on a Douglas fir that seems empty this morning without them.