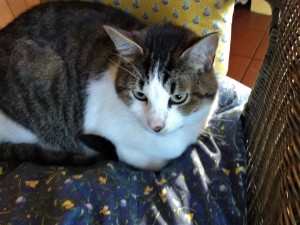 In January, 2017, a cat began hanging around our place. We don’t live near other people, apart from one couple just beyond us who are here part-time. We asked them about the cat but they didn’t know anything about it. I put out a bowl of food, which was eaten immediately, and I put a pillow on a chair under the eaves. I could tell the cat had slept on it the next day. It left a small shrew tucked into one corner of the chair. We put up a notice by the mailboxes and also posted the cat’s photograph on Craigslist and Kijiji. It was cold that January and we were living in a state of unknowing as shadows had appeared in my lungs and it was suspected I had metastatic lung disease. Many tests ensued. Then the cat decided to live with us. We named him Winter and somehow it was comforting to have this other life among us. I’d like to think he brought us luck because the shadows mysteriously disappeared and the tests were pretty conclusively negative for cancer. He was—is—a very easy-going animal. He’d curl up by our feet at night and make himself at home in one of the chairs by the woodstove during the day. He turns out to be a hunter, bringing us gifts of little creatures, mostly alive. We’ve managed to save most of them, or at least the ones we find in time. On nights when the coyotes sing, he’ll raise his head from the bed and listen, then return to sleep. His other life, the one before us, was a mystery. People would ask if he liked dogs and we’d answer that we had no idea. (I’m looking these days for the right dog to join our household and have been hopeful that Winter will adapt.) He was lean when he arrived but not emaciated. And when we took him to the vet for shots, the vet agreed with us when we said the cat had obviously been cared for. (The vet also asked us to let him know if we didn’t want to keep Winter because he was very taken with the cat himself.)

This morning a man came to buy a few books from me. We’ve known him casually for years. We’d see him down by the boat dock on Sakinaw Lake and he’d mention reading my books, John’s books, and we’d talk about other stuff too. I thought he was going to a job-site on the lake but it turns out he lives in one of the water-access cabins on the other side of the bay. It’s a few miles from us through dense woods. No roads, which is why he goes back and forth by boat. So as he was leaving, we were talking about animals—we were watching his beautiful Bernese mountain dog race around by the cars—and he said he’d once had a lovely cat that had disappeared, eaten (he thought) by a lynx that was hanging around and that another dog of his had treed at one point. When was this, I wondered. January of 2017 was the reply.

So Winter turns out to be Poncho, late of Sakinaw Lake, and with a previous life that included a trip to Calgary, maybe a tussle with a lynx, a loving family, and an adventure traveling from one remote cabin to our house (kind of remote also) in winter, with coyotes and cougars and other potential hazards for a small-ish young cat. We aren’t going to give him back to you, I told the man, and he laughed and said he completely understood. He called his wife and she was dumbfounded when he said he was standing in our kitchen, holding Poncho. We’ve offered visiting rights, beginning with dinner in a week or two.

It’s good to have the mystery solved. Sort of. But I also remember how his arrival felt like a gift in those dark days of winter nearly 3 years ago. Caring for him took my mind off my own uncertainty. Our uncertainty, because if the shadows had proved to be tumours, then our lives would have changed in ways I don’t really want to think about now. The light is low in the trees and it’s the time of year I can see little silver flashes of Sakinaw Lake from my study. Imagine a cat coming all that way.