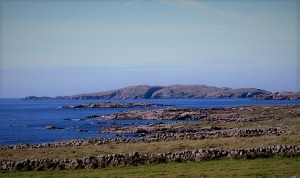 Yesterday we were driving home from another medical appointment and I heard a song on the radio that I kind of liked. What I liked was the chorus:

It reminded me of 39 years ago, in July, when I lived for a month in a small caravan on the edge of the ocean in Gannoghs, a townland in Connemara, not far from Cleggan. I spent two months in Ireland that summer, one of them in a cottage and then in the caravan. It was not fancy but I didn’t want fancy. I wanted a quiet place, in sight (almost) of the island where I’d lived the previous year and which was the muse (that’s not too exaggerated) for the novella I was finishing. After returning from that island, I’d met John and we’d decided to spend our lives together but first I wanted to finish my novella and that meant returning to Ireland.

The caravan had a bed that was stored in a wall and you unlatched it each evening. The view was a field and rocks and the water. There were cows in the field and they rubbed against the caravan. The first time they did it I thought I was the middle of the earthquake but then I heard them stomping around. There was also a neighbour, Bridget King, who lent me a bicycle and who visited most days. She was forgetful and sometimes she came more than once. She made a “cooey, cooey” sound as she rapped on the door with her stick. To get to the caravan you had to cross a stone fence and then push aside a tangle of fuchsia. Usually I heard Bridget but sometimes she caught me unaware.

John came in August and we spent a week in the caravan before going off on further adventures, including a week in Paris. I took him to meet Bridget, thinking that might forestall a visit from her. She lived in a cottage her husband had built with her help and she told me how they’d made the potato beds, draping seaweed over the rocky ground until there was enough depth for planting. (Gannoughs means “a place of stones”.) She had running cold water but no hot and she was elderly and her cottage needed a good cleaning. She had an old goose wing she used to sweep the table with, the crumbs and other bits and pieces landing on the floor. She found three mugs for the tea she offered us and wiped them out with a cloth that had seen better days. I was used to this but John had trouble drinking his tea. I should have warned him too not to take milk. There wasn’t a fridge.

This morning there was something in the air that reminded me of the caravan. The windows were loose in their frames and on a windy day the whole place smelled of ocean. The pages of the novella I was writing, by hand, scattered over the table and benches at the prow of the caravan where you could sit and feel that you were in the prow of a boat. The glass was even scoured by salt.

So that’s the postcard I send today, just before we head out for the follow-up to yesterday’s appointment. The moonlight was golden and we did build a beautiful life, one that goes on, despite the medical mysteries.

12 thoughts on “postcard from Gannoghs”