We went to Vancouver (3rd time in a week…) to see a concert, one of two for which the tickets were given us a gift by one child at Christmas. It was the VSO’s A Spanish Rhapsody, conducted by Jun Märkl, featuring the wonderful Argentine pianist Ingrid Fliter.

But first we went to dinner at Lupo, a restaurant we’d never been to before, though we’d heard good things about it. And yes, the meal was fabulous—I had duck confit with sausage and a delicious assortment of vegetables and John had braised rabbit with pappardelle. Before our mains, we shared a salad of beets, as sweet and succulent as any I’ve ever had, with two kinds of goat cheese—a fresh pool of creamy cheese under the beets and a roasted round of a more mature chevre beside them; and we also had a plate of vitello tonnato. Desserts were (for me) a roasted white chocolate cheesecake with a cherry compote and (for John) wild blueberry and coconut tart. We drank crisp white wine from Sardinia. The service was note-perfect.

It was the moment we were shown to our table that was most remarkable though. On the wall, right by our table, was a huge painting I recognized immediately as a Margaret Peterson. It was so beautiful, glowing against the putty-grey wall.

I asked our waiter where on earth they got a Margaret Peterson painting. He was gracious and said he thought it was from a gallery in Gastown that lends art to businesses like restaurants. The reason I was surprised was that I had forgotten about this extraordinary artist and I suspect many others have forgotten about her too. And that’s sad.

She came to attention in the 1950s and 1960s. You can tell, I think. Her work is abstract, highly influenced by her travels in Mexico, Central American, by Picasso and Braque, and by her own interest in Indigenous art. Her paintings are rhythmical and richly coloured.

I met her in 1975 or 1976 when I was a student at the University of Victoria. One of my instructors, the poet Rona Murray, took a few of us to have tea with Margaret and her husband, the novelist Howard O’Hagan. (I was so excited about seeing her painting at Lupo that I told the waiter all about her and O’Hagan and how important the latter’s novel Tay John is to an understanding of our province and its literary history that he came to tell me, between courses, that he’d ordered Tay John online and it would arrive by Amazon Prime today! I know my daughter will be rolling her eyes if she’s reading this and will ask me, Why do you do that, Mum? But I can’t stop myself.) Anyway, yes, a few of us were taken to meet them, Rona presenting a bottle of Scotch to Howard, and we spent a couple of hours in their company. They lived in a small shabby apartment on Dallas Road near Ogden Point and I remember wondering how such amazing people were reduced to such poverty. For it was clear they were poor. Howard wasn’t well. But Margaret’s work was on the walls and the apartment glowed. I remember thinking I’d like to know them better but I never met them again.

A few years later, Robin Skelton and Charles Lillard edited a special issue of the Malahat Review, gathering together the work of poets∗ and visual artists of British Columbia. The cover image is one of Margaret’s totemic figures. I was lucky enough to have 5 poems included in the issue (published in January, 1978) and I went just now to our library area to find my copy. 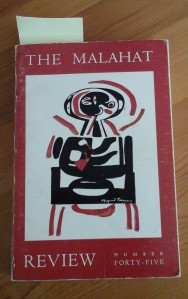 I didn’t expect to be taken back all those years when we walked into Lupo last evening, I didn’t expect to call the small apartment to mind, to recall those two people whom I never hear mentioned these days, apart from a conversation with Kevin Paul a few years ago when he said Tay John was one of his favourite books. It was one of mine too. I’m going to read it again for its resonant retelling of an important story of B.C., and I’m going to try to look for more of Margaret’s paintings. I remember a mosaic at UVic and I believe the Maltwood Museum had some of her work so I’m thinking it will now be held at the Legacy Art Galleries of the University of Victoria; the next time I’m in Victoria, I’ll see what I can find.

If you’ve never read Tay John, here’s a passage to encourage you to seek it out:

It was early autumn, then, before the snow began to fly. –(There’s an expression for you, born in the country, born from the imaginations of men and their feeling for the right word, the only word, to mirror clearly what they see! Those with few words must know how to use them.) Men who have seen it, who have watched it day by day outside their cabin window coming down from the sky, like the visible remorse of an ageing year; who have watched it bead upon the ears of the horses they rode, muffle the sound of hoofs on the trail, lie upon spruce boughs and over grass – cover, as if forever, the landscape in which they moved, round off the mountains, blanket the ice in the rivers – for them the snow flies. The snow doesn’t fall. It may ride the wind. It may descend slowly, in utter quiet, from the grey and laden clouds, so that you can hear the flakes touching lightly on the wide white waste, as they come to rest at the end of their flight. Flight – that’s the word. They beat in the air like wings, as if reluctant ever to touch the ground. I have observed them coming down, on a very cold day, near its end when the sky above me was still blue, in flakes great and wide as the palm of my hand. They were like immense moths winging down in the twilight, making the silence about me visible.

*A second issue devoted to B.C. writing and art focused on fiction. including a story by Howard O’Hagan, illustrated by Margaret Peterson. And I’d forgotten that I have a story in that issue too.

2 thoughts on “Radiance, all these years later”