We drove from Creston to Osoyoos today, along the Salmo Creston Road where there was snow at the summit, and a frozen lake. Part of the road washed away, simply collapsed down the side of the mountain, and a crew working hard to replace it. Same situation at Bonanza Pass, the whole side of the highway washed down the ravine. The Kettle River was higher than I’ve ever seen it. Along a stretch of highway just past Bridesville, road repairs from water that had uprooted small pines and taken down pasture fences. And today of course the American president has pulled out of the Paris Accord. The world begins to look like a place I don’t want to remain alive in forever, though I want my grandchildren to have a safe and healthy planet. Their parents are doing the right things, one of them a climate scientist who must despair when she reads the headlines. But still she walks everywhere with her babies, feeds them well, reads to them, and doesn’t own a car, preferring public transit and a bicycle when possible.

But some things are reassuringly the same. The house I always stop to photograph at the foot of Anarchist Mountain? It’s still there. I didn’t stop today but can use the photograph from last fall because other than the fact that the grass was green rather than golden this afternoon, the house is beautiful and serene in its age and resilience. 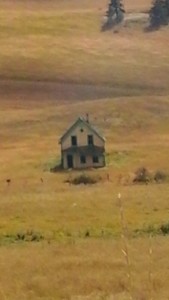 As we head for home—tomorrow!—I think of the summer ahead, the prospect of visitors (Forrest, Manon, and Arthur in late July, Angie and her beau overlapping I hope, and others here and there), the chamber music festival I help to organize, a new book arriving in early September, a garden (which will be overgrown when we arrive after two weeks away), birdsong from all those nesting near the house, swims in the lake, cool wine in late afternoon, the first sockeye on the barbeque.

An essay of mine is included in Mother Tongue Publishing’s spectacular The Summer Book and in it I remember everything I’ve ever loved about summers and my family. How time doesn’t pass, how it accumulates, how everything is contained in a single memory that takes a whole life to celebrate.

There are calzones in the basket and tins of sparkling lemonade; later, bottles of cider, cool from the shallows where they’ve been corraled with rocks. How long can a girl dive before her father accords her a perfect score, how many times can a boy circumnavigate the island with the throttle on low? Another practices the dead man’s float. Three years, or six. Drift on a raft under the low-growing spirea and bog laurel, count turtles on logs, crush a few leaves of wild mint in your hands while the years accumulate. Nine years, or twelve.

I called my essay “Love Song”. And it is.